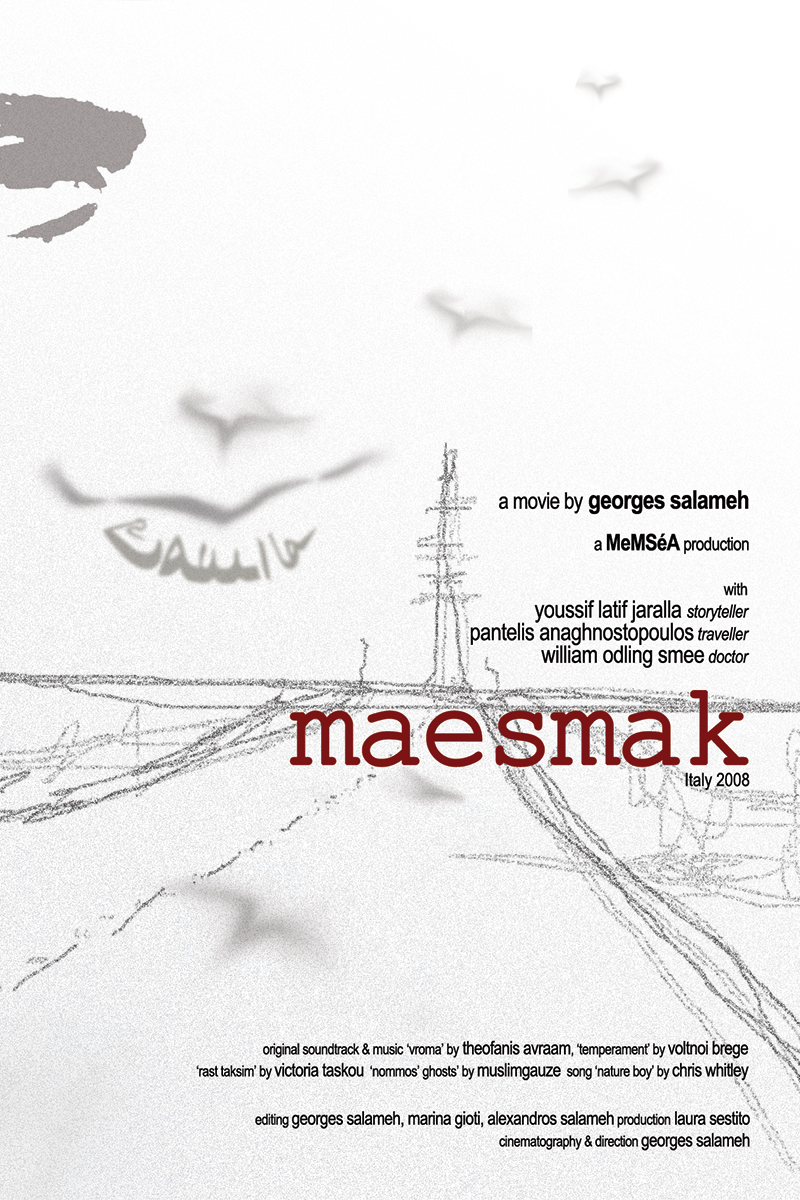 Maesmak is What’s your name? in Arabic.

Maesmak is a meditative exploration of one day spent in Rutba in late 2002, to plant an olive tree against the war, just before the invasion of Iraq.
Maesmak is also a metaphor about cancer, a disease consuming and invading the body of a dictatorship. Its main victims though are the ones without a name in the books of History. 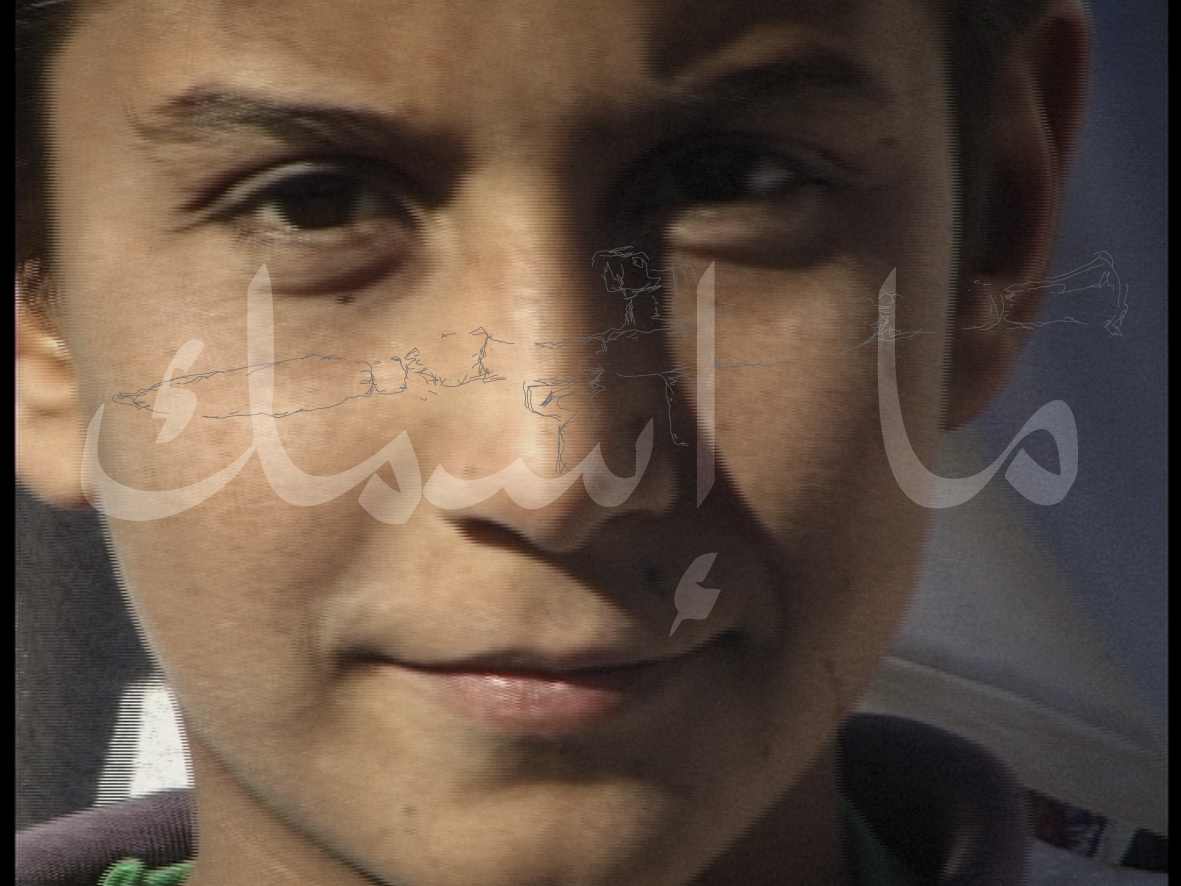 Remembering what is already forgotten

Set in 2002 in Rutba, Maesmak is a poetic documentary that portrays a road trip to Baghdad, a go-to-death journey experienced by a Greek traveller, an English doctor and an Iraqi story-teller. All this happens just a few weeks before the invasion of Iraq.
Far from claiming to speak on behalf of people’s experience, this documentary respects the distance between the observer (the travellers) and the observed (the Iraqis). The film’s images are in a dialogue with the travellers’ discourses, but are not subsumed by them. They delineate psychological journeys of people who feel their forthcoming death, see the inevitable, negotiate what cannot be bargained. Constituting a map of emotional process of dying on both an individual and collective level, the film keeps posing the persistent question: “maesmak?” meaning “what is your name?”
Georges Salameh made a film about remembrance of what is already forgotten, what is already erased “from the books of creation, where the name and the date of birth is not there.” He builds up a story where the voice-over splits in three different voices (of the traveller, the doctor and the story-teller), the images succeed each other outside any rational sequencing and the irrationality of death and war is what binds and holds these images together. Salameh thus manages to speak about the unspeakable: death. He gives us a testimony of what precedes death and of the death’s effects developed in its shadow. As the doctor’s voice informs us, encountering death always entails a passing through stages of anger-denial-bargaining-depression before accepting the inevitable.
The film’s images run as ruins and fragments of a pre-war world that moves in-between a black-and-white and at times colourful reality, while the music reproduces a certain sense of angst about the coming event of war and death. At times images become scratched by psychological traces, blurred by memory, or clear like mirrors that reflect and accept the forthcoming event.
The film can be experienced as one-way street: what the Greek traveller wishes to do “…leaving from the same road by which I entered Iraq” is simply not possible. The road is no longer the same and the traveller himself has changed. The image cannot be forgotten, cannot be exorcised. Maesmak ends with close ups of children’s faces – shots that compel the spectator to remember how it is to smile after giving up hope and compromising with death; how it is to have a face that owns nothing but an innocent smile.

Maesmak? What is your name?

“Let us meet at the end of the day and let’s see if the books of creation have my name and date of birth”(an Iraqi child).
Knowing his coming erasure (his state of no-name, no-body) the only thing the child possesses is his capacity to smile: a living proof of his humanity before he vanishes into a total of all numbers of war victims.
After this screening the spectator cannot but remember ‘Maesmak’ as the name that will have been forgotten, since the film reminds him/her of the ethical ‘duty’ to pay homage to this imposed oblivion of the erasure of singular lives in wartimes. A remembering that takes place not through the lines of a written history, but though the visual forces of Maesmak.

A Field Guide To Getting Lost Vol.2
Maesmak: What's your name?

War, death and advocating for peace appear in ‘Maesmak’ that Georges Salameh completed in 2008. 'Maesmak' is an experimental documentary. The title is in Arabic and it means ‘what's your name?’

The starting point for the film was in 2002 when Salameh travelled to Iraq and joined a peace procession. During the procession, he accompanied Pantelis Anagnostopoulos- one of the central figures in the movie. Eventually, the procession would end up with planting an olive tree in Rutba in the middle of the desert, at the Western gate of Baghdad, as a symbolic gesture and a sign of peace. Strange as it might seem, the invasion of Iraq took place only a few weeks after Salameh’s voyage.

The title ‘Maesmak’ and ultimately the question ‘what is your name’ alludes to the groups of children the artist encountered in Iraq and accounts for the victims of the war whose names are never recorded. It is a fact that Salameh began to edit the film 5 years after his voyage and the invasion. Throughout the years he could not disquiet the thought of ‘what had happened to those he met in Iraq?'. Despite the turbulence, Salameh had to be sunk in thought and to let the time pass, before he would start editing.

In his effort to recreate the never-ending wounding of war, the question ‘What's your name?’ functioned as a rhetorical device that facilitated the artist to dwell on the events.
During 2002 -2007, the artist purposefully trickled to oblivion, so as to witness forgetfulness. Once he reached that end, he recovered and finally set free from mental numbness, a kind of coma that opposes to sensitiveness and liability. The whole process he underwent was a lasting practice and a lesson of learning how to recover the truth and oneself.

For the narration of the events, Salameh collaborated with the Iraqi artist and storyteller Yousif Latif Jaralla. They met in Palermo, Italy in 2007 and by that time Yousif was already in exile for more than 20 years. In one voice over Salameh recorded Yousif narrating the story he had written for 'Maesmak' in Arabic. In the film, Pantelis describes the endlessness of the desert, while Yousif talks about Baghdad as an invisible city. The two men create an instant dialogue and they alarm us for the psychological death that comes with insensibility. To this contributes the reference to the emotional process that people undergo, in order to accept death, when they are terminally ill, which Salemeh added in the movie.

The film discloses the cruelty of war that neither a humanitarian protocol can describe, nor a political speech can tackle and address transparently. It comes through that on every "grim day", we should resist to comply with forgetfulness.