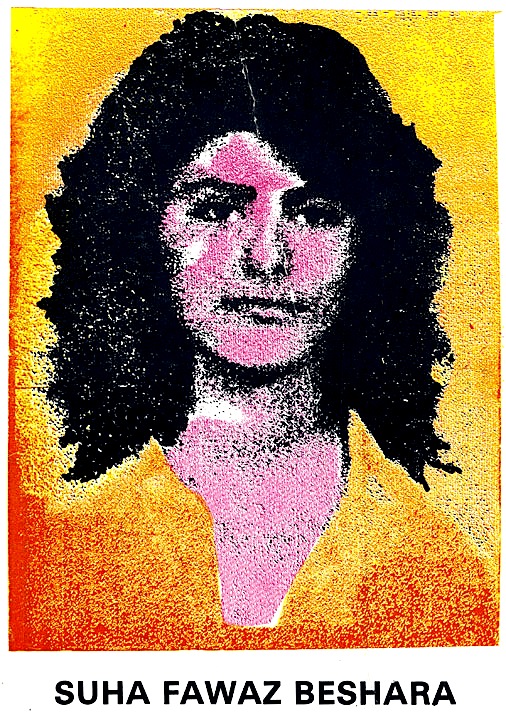 Fleeing the nightmare of Lebanon's civil war, we arrived in Greece in August 1989 ...
Few weeks later we are at my Aunt's in Athens. They are already here for some years now: they had fled during what was to be labeled in that war: 'the 2nd Israely invasion'.
While mother is discussing with my aunt her decision to remain in Greece, me and my cousin Vladi sit and listen to some old cassette tapes he had recorded from that mythical radio series by Ziad el Rahbani: 'El Aael Zeeneh': hilarious satire and tragic-comic live shows, commenting on fratricidal war and its middle eastern repercussions ...
Before leaving he hands me a few cassettes and a postcard with a woman's portrait.
I don't even remember if he mentions to me who she was !
For some reason, I kept it in my stuff for years.

In February 2000, I find some really cheap plane ticket to visit Lebanon.
It was also an occasion to discover a country I left as a child and never really experienced outside of my family's cocoon.

One afternoon, wondering in downtown Beirut, I accidently come upon a film festival in an old theater .
They have a retrospective on a Canadian-Lebanese artist & filmmaker: Jayce Salloum.
After watching 2 of his movies: 'Up to the South' & 'There Was and There Was Not', he shows a work in progress version of 'Everything and Nothing' .
The movie is about a figure of resistance, Soha Bechara, ex-Lebanese National Resistance fighter, released few months before, from captivity in El-Khiam torture and interrogation centre (South of Lebanon), where she had been detained by the israely army for 10 years, 6 years in isolation.

Not until few weeks after my return to Greece, that one day, on one of these aimless strolls in the streets of Athens, I made the connection between the movie and the postcard.
Since that 'Satori', she accompanies me in all my migrations ...
Email ThisBlogThis!Share to TwitterShare to FacebookShare to Pinterest
Newer Post Older Post Home