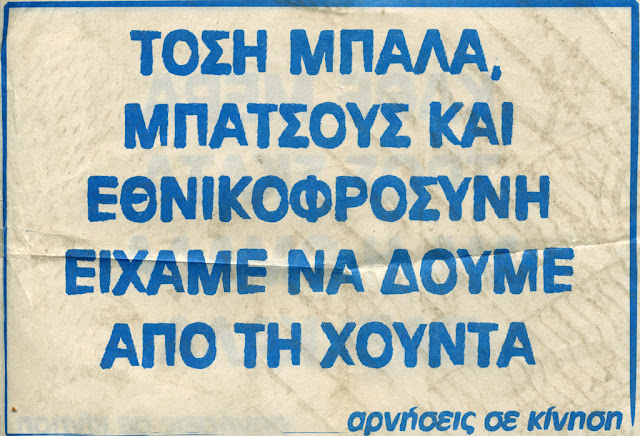 Omonia square
Extract from a letter to Annie
...Looking through boxes of archives and old mini-dv tapes, after my relocation to Palermo, I found this leaflet. It catapulted me to that Saturday night's events, in Omonia square, in September 2004.
Just a week after the closing ceremony of the Athens Olympics.
Three months after the triumph of the Greek Football team at the European Championship.
The next day, On Sunday morning, I came back to the 'crime' scene where it all started, at the square, to look for answers.
I was there to take some photos of the aftermath, but ended up just hanging around, under a warm Athenian autumn sun.
A large group of people mainly youngsters where demonstrating their solidarity towards foreign migrants and singing out their anger to what had happened the night before.
I picked up one of their leaflets from the ground: "That much football, police and nationalism, we hadn't seen since dictatorship".
The Saturday night events came back to me under a new light.
I had witnessed hideous racist acts of violence, but something else emerged.

Tassos & I had gone out to Omonia square to buy the Sunday newspapers.
On our way out from the subway we suffocated into a teargas cloud.
When we reached out of the metro stairs, around us was riot police everywhere, chaos, sirens, street fights, trash bins on fire and ambulances picking up injured.
Surreal and racist scenes!
Hundreds of Albanians had gone out that night to celebrate their team's victory over the Greek one.
Their celebration was not to be allowed by 'Greek hooligans' from extreme right groups with a visible but camouflaged support of policemen in the name of order & security.
The confrontation turned out to become a bloody nightmare: dozens of injured & arrests.
That same night, on the island of Zakinthos, a young Albanian was stabbed to death by a Greek 16 year old boy with the same motives.
Few days later more than 200 Albanians were deported back to their country in the absolute silence of the media. I found some traces of the aftermath in the Karamanlis government spokesman's press release, in Kathimerini and Eleftherotipia, in the Monday newspapers but nothing else.
Those dark moments seem to me today to be the first signs of the beginning of the fall of a nation; as if the Greek Crisis had already begun back then...

Today, from my self-exile, on the island of Sicily, those events are already forgotten, but Greece still lives their impact and drift.
I wanted to share those thoughts with you because in that same box I found an old copy of 'Tropic of Cancer' by Henry Miller, you had left in my apartment few month earlier. I started wondering about those objects that migrate for reasons that we still have to discover...
Palermo, February 2011.
Email ThisBlogThis!Share to TwitterShare to FacebookShare to Pinterest
Newer Post Older Post Home