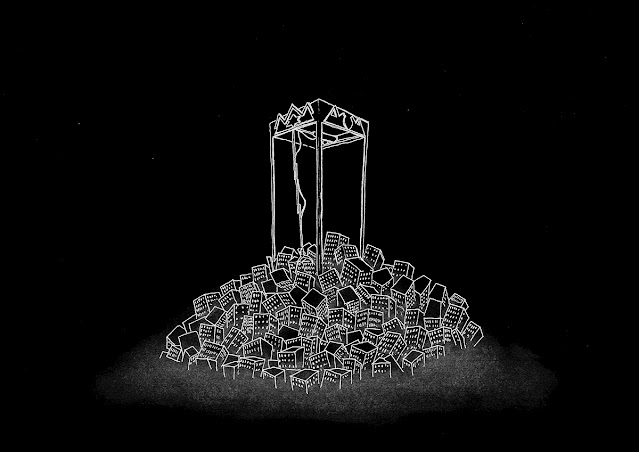 Synopsis
Claw Machine is the story of immersion into a wound. It is an experience of uprooting. Let yourself carried away by past events, unspoken, indescribable. Your memory is shaken. Your eyes closed. A basic dilemma emerges, resistance or exile. A voyage of no return. You drift towards the unknown.


Project history
Claw Machine is a collaboration  with Andrea Kantos, Sicilian visual artist and with Yousif Latif Jaralla, an Iraqi narrator (hakawati). This endeavor starts in 2009 with the pretext of the numerous wars in the Middle East (Iraq, Lebanon, Gaza). The first script and sketches took form in Palermo while I was living there, we worked frenetically until May 2010. But the project was suddenly put on halt, remained incomplete, and ended up laying in my drawers for the next ten years.

In February 2020 I went back to Palermo for the exhibition of the body of work LET US STOP AND WEEP as a narrative-based participatory performance, at Eglise. I met again with Andrea and Yousif and we decided to pick up on Claw Machine from where we had left it and complete the work to be included as an opening screening for the performance. Since March a year ago, through this epidemic era we managed to work online and produce many other sketches and a full storyboard. In parallel we fine-tuned with Yousif the text for the voice over.
The post-production is schedualed for end of autumn.

Like other chapters from LET US STOP AND WEEP (Nabil & Corni, Asnam, Hafez from Anfeh, Red Poker…) Claw Machine has evolved into an autonomous one. It is now a project of a video installation that combines moving images with animation. It is primarily based on personal experiences during the civil war Lebanon War (1975 -1989) and the repeated bombardment of the Beirut periphery I grew up in. It also summarizes a collection of stories and interviews I did with refugees who arrived in Greece (2016-2017), escaping the recent civil wars in Syria, Iraq and Afghanistan.

All this research and effort to collect those stories around this experience is just an attempt to capture the deafening silence that engulfs a city and its people, their unheard screams and their silent terror, before fading voluntarily into the sounds of their flight and the sea waves.